A longish day planned for today helped us decide to start moving our wake-up time to 6:00 rather than 6:30 to keep up with the sunrise getting earlier, and we tried to be fully on the move by 6:30.

Some chatting with our hosts Murray and Kathryn, though, meant that we ended up actually leaving at about 7:05 which was a-okay with us, we couldn’t thank them enough!

Our walk got warmed up with a stroll through an arboretum, in which we marveled at some redwoods and were astounded by the morning cacophony of an infestation of roosters and hens, there in such quantity for no apparent reason.

We walked along a fenceline in pastures beautifully lit up by the early morning sun, climbing some hills affording amazing views of surrounding pasture land.

A quick jaunt on roads until we turned onto a track that follows the Waipa river but is overgrown and was wet in places – the hiking recently has been so cushy and nice that that kind of stuff was the low point of the whole day. (Except for Jack probably, who both fell victim to an electric fence he brushed against very lightly with his thigh, and later took an AMAZING fall on some slippery hard soil while descending a hill).

After the river walk we charged up Old Mountain Road, past the Karamu Lodge where one can get a tent site for $30 or a room for $100 – absolutely ridiculous by hiker standards – but which still advertises itself as a “trampers’ rest”, and along some very open country with views up into the pastured high hills we’d be traversing in the afternoon. 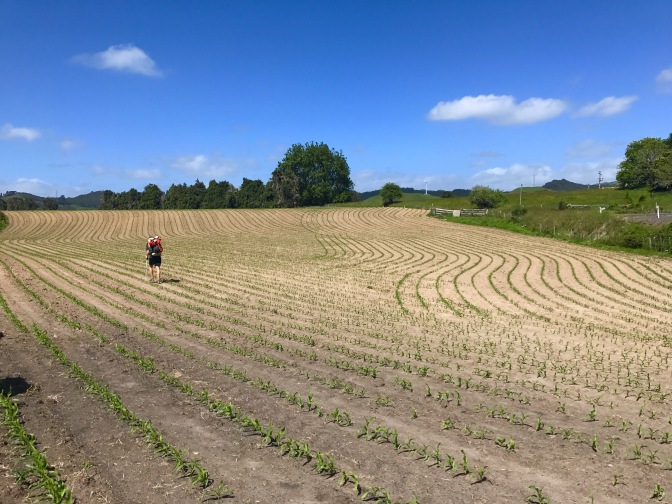 As we turned off the road onto the Karamu Walkway we started searching for a lunch spot and soon found one of the best spots for lunch and a nap that we’ve found the whole trip – among some boulders, in the shade of some smallish trees, on the side of a ridge in the high pastures – where we ate a lunch augmented by new spinach wraps and some cheese, both picked out by Shepard and me, and immediately passed out in the sun on the warm rocks below.

After about a half hour of lounging we packed up and were on our way, through a section that was both the mostly densely sheep-populated section yet and one of the most exhilarating sections yet: the altitude and the wind and the open, grassy, bouldery landscape felt almost faux-alpine and though I sort of wished the area hadn’t been deforested and used for pasture it made me so excited for real alpine areas, on the South Island and further down on the North Island. We had a blast completing that section, taking pictures of cute sheep and watching dogs herding cows below us, but definitely got our shoes covered in sheep poo and mud which probably had unbelievable concentration of sheep poo anyway. 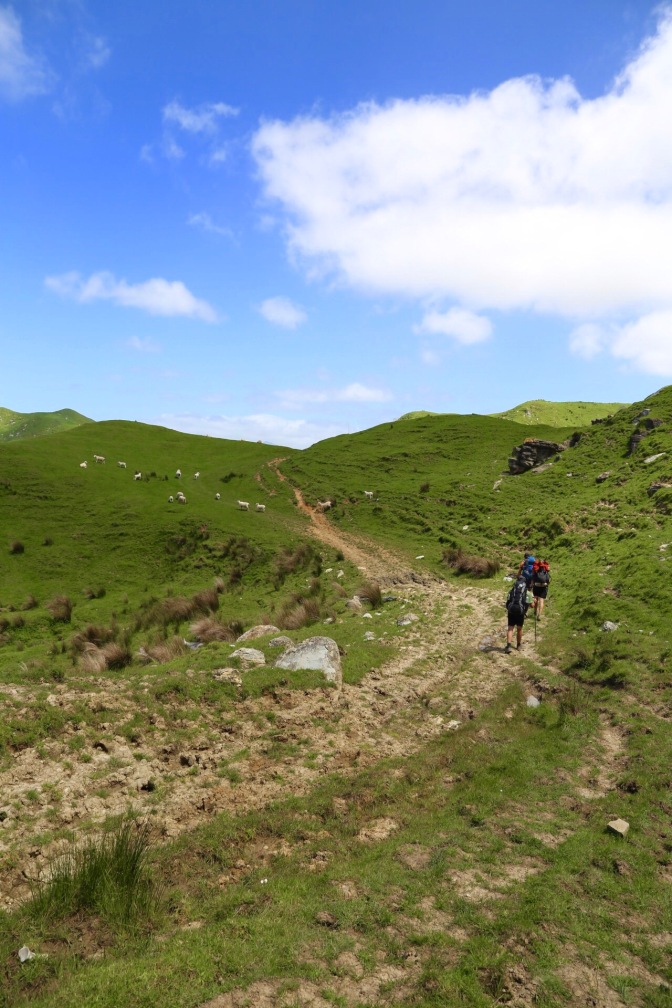 Going through the next short section of forest was where Jack’s impressive spill took place.

Once out on a road we just walked a couple k and turned on the Nikau Walk, a super wide and easy path that follows the Kaniwhaniwha stream up to our campsite for two or three k – actually, while we cooked dinner a woman crested the slight hill into the campsite area with a stroller, that’s how accessible the place is. After a leg wash in the river and a spaghetti dinner we played only one hand of cards (see our site menu for an updating Hearts score) before the temptation of warmth in our tents overcame us.

We are planning to hike only 8 or so km tomorrow but it will be up to the summit of Pirongia so it might take some effort. Excited for the hut near the top; it’s our first DOC hut that our backcountry hut passes will work at, so that’s bonus as well as the great views we think there might be if the weather stays clear.

Putting one foot in front of the other, as Murray reminded us is the key to thru-hiking success.

One thought on “Day 34 – Dinsdale to Kaniwhaniwha”