Today was yet another one of my favorites on trail, something I’ve found myself saying each day in the Richmond Range so far. We woke up after an hour of sleeping in at 7:00 AM, and headed out of Rintoul Hut up the ridge toward Purple Top.

We passed by our new friend Kate again on the way up the tree-covered ridgeline. From Rintoul we could see exactly how steep the ridge was, and we were pleased that for the most part, the climb turned out to be as gradual as we had hoped. However, just before leaving the tree line, we hit a bit of climb. Once we broke above tree line, the walking was gorgeous, and a great way to really start our day. It was pretty steep up to Purple Top, but nothing we hadn’t seen before.
We broke at the peak to admire the views provided by the gorgeous range complimented by perfect weather.

We headed down from Purple Top back under the treeline, where we descended until we reached Tarn Hut at around 10:00 AM.
At the time we were just thinking about reaching Mid Wairoa Hut for the day, and there was a deck of cards lying in Tarn Hut, so we stopped for a few rounds of Hearts.  Side note: We carry or own deck of cards but as they’re getting quite worn, we jump at any opportunity to get use out of another deck.

Tarn Hut sits beside a beautiful little lake full of tadpoles and surrounded by big trees, sweet place to spend a night. 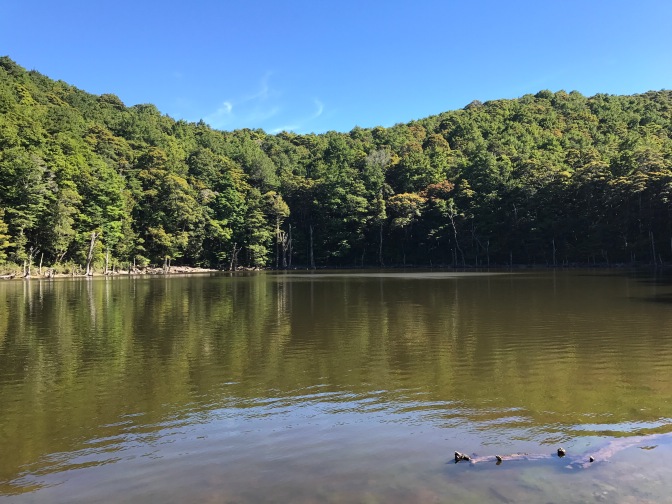 We moved on from Tarn deciding to have lunch just after a 200 meter ascent. Once we made those 200 meters, we decided to just push on to Mid Wairoa for lunch. We got there at around 1:30 PM. Two DOC trail workers were staying at the hut.

Awesome job they’re doing. Interesting to think about how no matter how big an accomplishment our journey feels to us, we are only able to do it as a result of the hard work of those who build the trail.
It’s important to keep in perspective that – no matter how badass we feel climbing a sweet mountain – our badassery only exists as a result of the badassery of those behind the scenes. Thanks DOC, killing it out here.
We decided after eating that it’d be smart to push on to Top Wairoa hut. That way, we’d be able to eliminate a few hundred meters from the climb up Mt Ellis tomorrow, and be able to push further after summiting. That way, we could make it to St. Arnaud sooner on the 18th, when the forecast suggests rain, anyway.
We began climbing up the sides of the Wairoa river, a gorgeous strip of water that crashes all the way down the mountain. Sidling the river bank took us up and down some pretty rough terrain. Very important to keep good footing there so as to not fall down toward the river below. We had to cross the Wairoa a number of times before we really started climbing, which brought excellent views of some really great water falls. 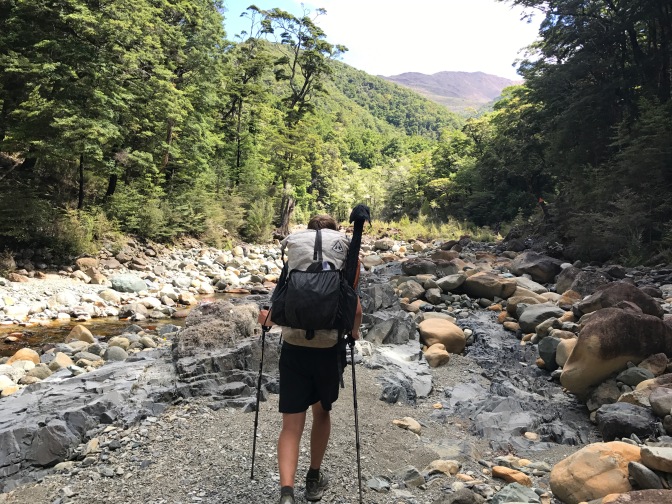 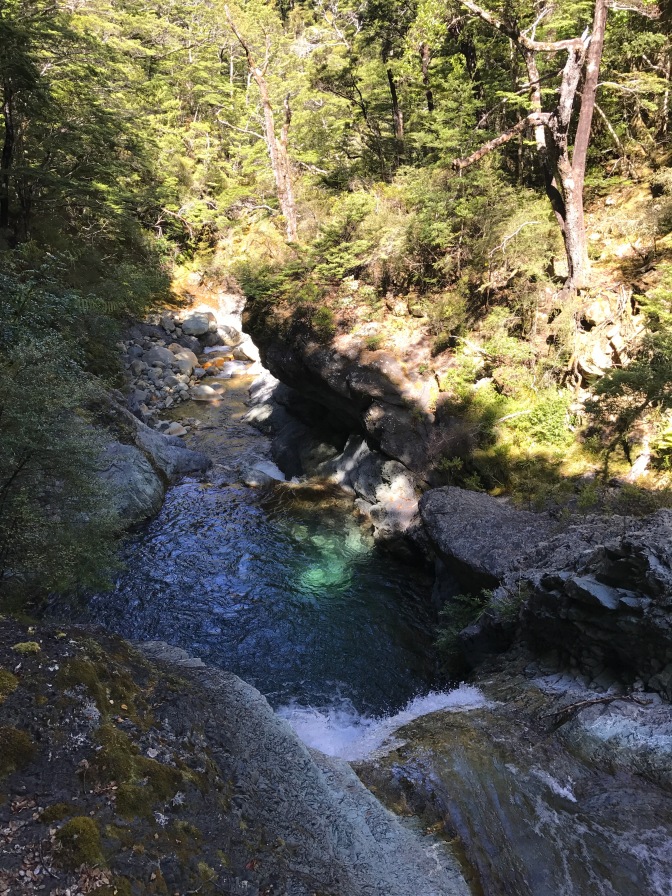 When we were just over 1 km away from the hut, we came across the coolest waterfall yet. An amazing 20 foot cascade poured into a deep blue pool below. We were all surprised to hear Shepard say that he wanted to go for a swim, something he so rarely has any interest in. I would never pass up a chance to swim with Shepard, as getting him in cold water is more difficult than getting a cat to bathe, so we stripped down and headed for the falls. Jack, Shepard, and I spent a few minutes jumping from the top of the falls and splashing around the frigid water before heading back up to Sam.
From there, we made our final push up above the treeling to Top Wairoa Hut, a cool bright orange hut with 6 bunks and a fireplace. We played some hearts, Kate showed up, and we cooked dinner. We have extra food given that we supplied with potential weather hazards in mind, so we got to double down on dinner. After cous cous AND spaghetti, we got a fire going in the hut, played plenty of Hearts, and are heading off to bed. Great to be in a hut in the mountains with a hot fire burning low. Great end to a great day.
Tomorrow’s our last day above the treeline in this awesome range. Heading to Porters Creek Hut tomorrow, and to St Arnaud the day after. Feeling great.
Jasper

One thought on “Day 78 – Rintoul Hut to Top Wairoa Hut”