total TA km: 2585
We roused ourselves at 7am and quickly out our things in our bags and then somehow left a little bit before 8. (Probably because Jasper and I took our time with our bowls of cereal). As the sun started to heat the day up we started our 4km descent to the gravel road.

The descent was brutal. Over an hour and change we zig zagged down the ridge, really making our knees happy as we descended. 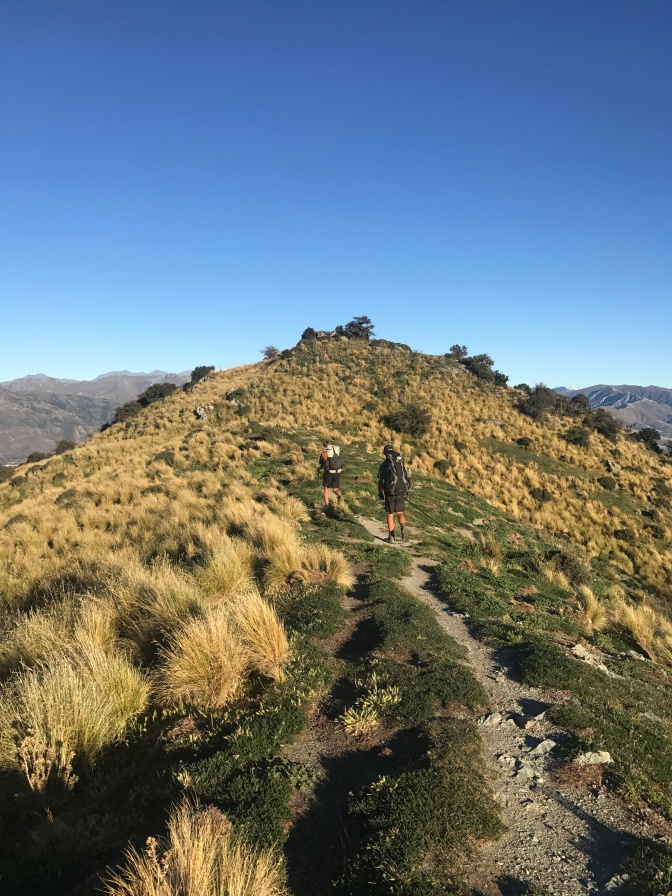 Even though we were in the shade of the mountain the heat was already pretty stifling for 9am and quickly we were soaked in sweat. Thankfully though we don’t have to wear the wool blankets that the sheep in the pasture to our left have to.

We reached the bottom and immediately started walking vaguely towards Wanaka, eager to see the town and the food it had to offer us. Very quickly our shade abandoned and we were left with nothing but sunglasses and water. Although the track around the bottom of Lake Hawea was incredibly gorgeous with huge mountains springing up on either side and the crystal clear water inviting us for a dip, I found myself stuck on many ice cream flavors and ice cubes.

After the flat track around Hawea ended we picked up another flat, hot, sunny track along the Hawea river and followed it to Albert town. 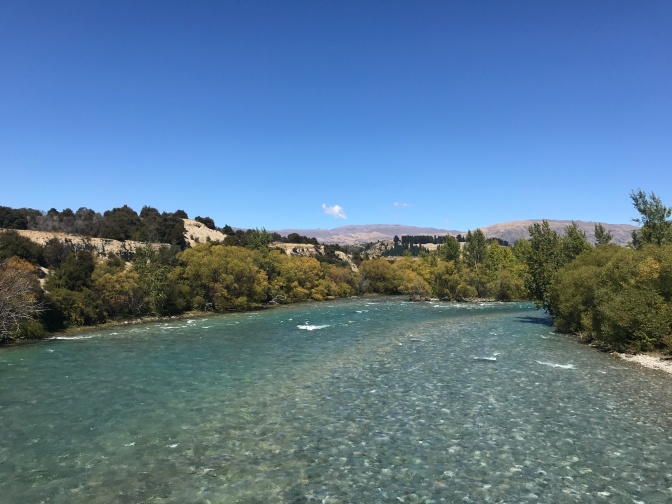 The heat was stifling and we again found ourselves just zoning out trying to get through the section rather than able to enjoy it. We took lunch next to the Hawea river water park, which was a really nicely built surf place in the river. There were a bunch of people surfing the waves, so we sat and watched for a long time while we ate lunch.

After lunch we begrudgingly took to the hot gravel track again and immediately I drifted back into the world of cold. Almost seven kilometers and a couple of empty water bottles later we reached albert town where we unanimously decided that it was time to hitch the last couple kilometers into Wanaka. The heat had done us in.
After about ten cars and seven minutes we got picked up and swiftly dropped off at the door of the YHA in wanaka and instantly our life was better. When the trail is hot and uninteresting, sometimes a hitch makes all the difference.  We hung out and collected ourselves again, doing laundry and making ourselves feel good again, we each wandered around town and found what we had been craving, mainly ice cream and took the amazing views in.
A couple hours later we treated ourselves to an awesome dinner on the streets of Wanaka, rewarding ourselves for the really rough five days we had just accomplished. At dinner we talked more about what we have in store for ourselves after the trail.
Tomorrow we wake up and do it all some more till Queenstown.
Love,